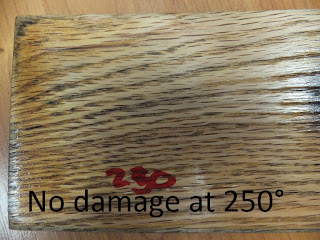 Recently a customer asked me how Permalac would hold up to heat. Specifically he was concerned because he had finished some tables for a pizza parlor and the finish he used was failing, even against relatively minor heat such as a coffee cup. Currently we rate Permalac as safe to use on objects up to 200 F. This customer wanted something that could stand up to 400 F. I was curious to see how Permalac would do under those conditions.

To simulate his tabletops I finished a piece of oak with four coats of Permalac. For the hot pizza I used steel test panels heated with a MAPP torch. I used a laser thermometer to take temperatures. For this trial I decided to test three temperature ranges. 250 F, just beyond what we know Permalac will take, 400 F, what the customer wanted to know about, and 650, well outside of the range. 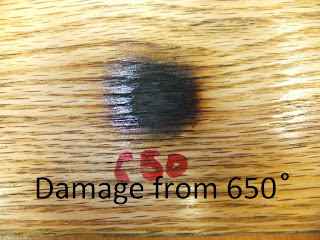 What I found was that the Permalac had no problems with temps of 250, at 400 there was some melting, and at 650 F the coating broke down and the wood singed. If you are planning on putting something that hot on Permalac, use a trivet.