Visual art is as old as the hills, perhaps even older. What’s known as a cupule, an ancient form of Petroglyph (rock art) is perhaps the oldest known visual art made dating back to 1.7 million B.C.E. Prehistoric man was a creative sort, although back then, thoughts were to do something differently. Cupules can be found on every continent with the exception of Antarctica.1 Of all prehistoric art the cupule is the least understood, as through the use of percussive beating of some implement against the vertical or horizontal planes of rock creating deep holes (as pictured above and below). 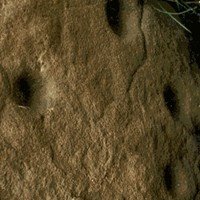 This is the earliest period of the Paleolithic Age. It runs from the first appearance of Man as a tool-making mammal to the advent of important evolutionary and technological changes which marked the start of the Middle Paleolithic. It witnessed the emergence of three different tool-based cultures: (1) Olduwan culture (2,500,000-1,500,000 BCE); (2) Acheulean culture (1,650,000-100,000 BCE); and (3) Clactonian culture (c.400,000–300,000 BCE). In a sense, stone tools represented the “art” of this period – the key form of creative human expression.  –  Visual-arts-cork.com

What, pray tell does this have to do with Permalac?

Interesting question. As newsletter and blog articles have articulated, there is a very active artisan base that are more than happy to utilize the various Permalac products. From metalwork sculptors to fine jewelry craft folk, as well as those working in wood and stone (and stone-based products), Permalac has proven to be a critical element in the preservation of patinas, ultraviolet light, and wind, rain and snow.

Expression of creativity through various art forms is a common trait in us humans. From the dawn of time visual arts is an important communications tool that has kept people informed, entertained, and an opportunity to express one’s perspective. Too bad Permalac wasn’t around in ancient times.

As time moved forward, visual art evolved into all matter of artwork, from cave etchings and paintings, through to the modern day. Today Permalac protects and enhances everything imaginable. We’ve published contest winners’ projects like the sculpture in Nebraska that stands up to the harsh weather on the Great Plains to the old car enthusiast in Dallas Tx, fine jewelry artisans and how to avoid the junk yard look.

Dubuque’s Art on the River

Metalworks sculptures were all the rage at the 2014 Art on the River Exhibit, and only one can be certified to have used Permalac as a sealant for the work known as “Do Something Differently.” Now, I don’t know about you, but I see several art pieces that could have used a little Permalac, right? But I guess to each their own.

As mentioned earlier, our Mr. Flanary stands by his continued use of Permalac as the sealant of choice for all of this metalworks art. And we certainly appreciate it.

More commonly known as Bronze Anvil, the story of its origin is a rather interesting one. It seems Peter Flanary, sculptor from Mineral Point, Wisconsin exhibits the sculpture privately, although it has been shown in various exhibits throughout the Midwest.

To put it in Mr. Flanary’s own words:

The artwork has been exhibited in my studio’s outdoor exhibit space in Mineral Point but has not been in a public venue.

The inscription “do something differently” is the statement. I feel that explanations may miss the point that the sculpture is first a poetic entity.

An “ explanation” should be predicated with a warning, that as soon as I say that the sculpture means “This”, that it may also mean “That”.

That said, the forms are kind of a symbol, in this case the anvil and the star. Implied in these forms is a pairing and interaction of gravity and levity, a celestial and terrestrial arrangement. The making of something, the conscious mutability of matter, is the task at hand.   –  Mr. Peter Flanary

Everyone here at Permalac HQ are proud to have discovered yet another masterpiece being protected from the elements, and also shielding the patina from HV rays.

In researching this project some interesting facts about the city of Dubuque, Iowa were found to be uncanny. The city proper holds a population of a little more than 56,000, but the Non-Profit Dubuque Arts & Culture produces more than $47 Million in annual revenues (and this is a published number from 2010). Pretty amazing.

Throughout the year the arts organizations throughout Dubuque hold events that include Snow Sculpture in the Park, the Annual Art on the River (that’s the Mississippi in case you were uncertain), and dozens of art and culture events and activities for all age groups. What a dynamic little community with a big arts and culture attitude.

Hat’s off to them!

Send us your before and after photos (or a video) along with an overview of the project and how Permalac helped. With each submission you will be entered to win a $25 Visa Gift Card in our monthly drawings. Use the form below, tell us a little information, add your images, and click submit. We’ll announce the winner in our monthly email newsletter (we’ll add you to the subscriber list. No worries; you can opt out at any time, but why would you? It’ full of great information and special offers, and we’d never divulge your information)