Home/blog/The Muses are brought back to life

The Muses are brought back to life

The Fountain of the Muses is a spectacular installation with 15 life-size bronze sculptures installed in a reflecting pool and fountain.  It is one of the most visited pieces of art at the Brookgreen Gardens in Murrells Inlet SC.   Over the years, however, it had taken a beating from UV, salt spray and wind borne sand. As a result the management of Brookgreen decided to drain the pool this past fall in order to give each sculpture in the assemblage a careful inspection.  At that point it was clear that immediate attention was called for.

History of the installation

The Muses were ancient Greek deities who inspired the highest artistic ambitions of mankind. This famous series of sculptures was created by Carl Milles in the early 1950’s. For a number of years it served as the decorative center piece of a 2nd floor restaurant in New York’s Metropolitan Museum of Art.

Milles described the inspiration for the work as follows:

“Five of the eight figures in the pool have just been drinking the water from a legendary well that inspires artists to work and create. We see them rushing home filled with new ideas.  These concepts are represented by the objects they carry.

The Poet: a blue bird. The Architect: a newly formed column. The Musician: a curious instrument. The Painter: Flowers.  And the Sculptor: still reaching for his gift from the Gods.” 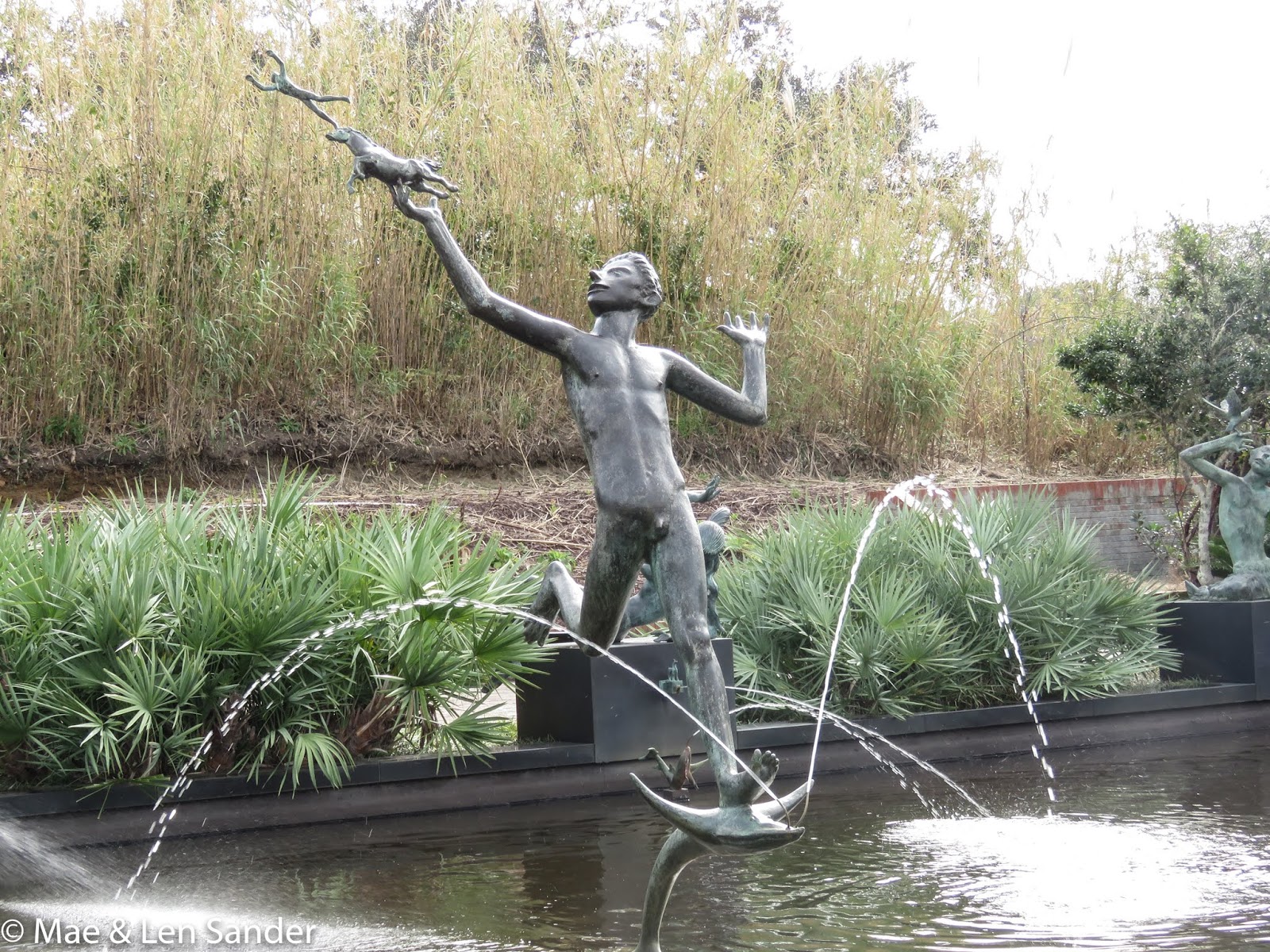 In 1984 it was decided the fountain could no longer stay at the Met.  The 300,000 lb. assemblage presented safety issues that couldn’t be solved.   It was then sent south and given new life at Brookgreen Gardens.  This 9,000-acre preserve of formal gardens, meadows, wetlands and wildlife preserves features exclusively representational sculpture and exhibits 1444 major works by the most celebrated American artists.  Naturally, they are dedicated to the preservation of the sculpture collection. Which can be quite a challenge with the ultra-violet assault from the bright outdoor sun, and the constant salt spray and wind-borne sand from the nearby Atlantic Ocean.

Once these forces begin to corrode the bronze surfaces of a sculpture, protective action must be taken while full restoration was still possible. Ted Monnich, a specialist in bronze restoration and preservation was called in to develop a plan with Robin Salmon, Brookgreen Garden’s curator. The three-day process they decided on started with washing down all the exposed bronze surfaces with a mild detergent mixed with a kaylating agent.  Next workers went over every square inch of each sculpture with reticulated foam pads and acetone to remove any remaining corrosion residue.

The artwork was now returned to a condition that was close to its appearance when Milles finished it 60 years ago.  The key challenge now was to maintain this appearance as long as possible.   Protecting The Fountain of the Muses sculptures required a coating that would not alter the appearance of the original bronze appearance in any way.  At the same time, they needed to block UV, salt spray, and wind-borne sand from reaching the metal surface where abrading or corrosion could occur. 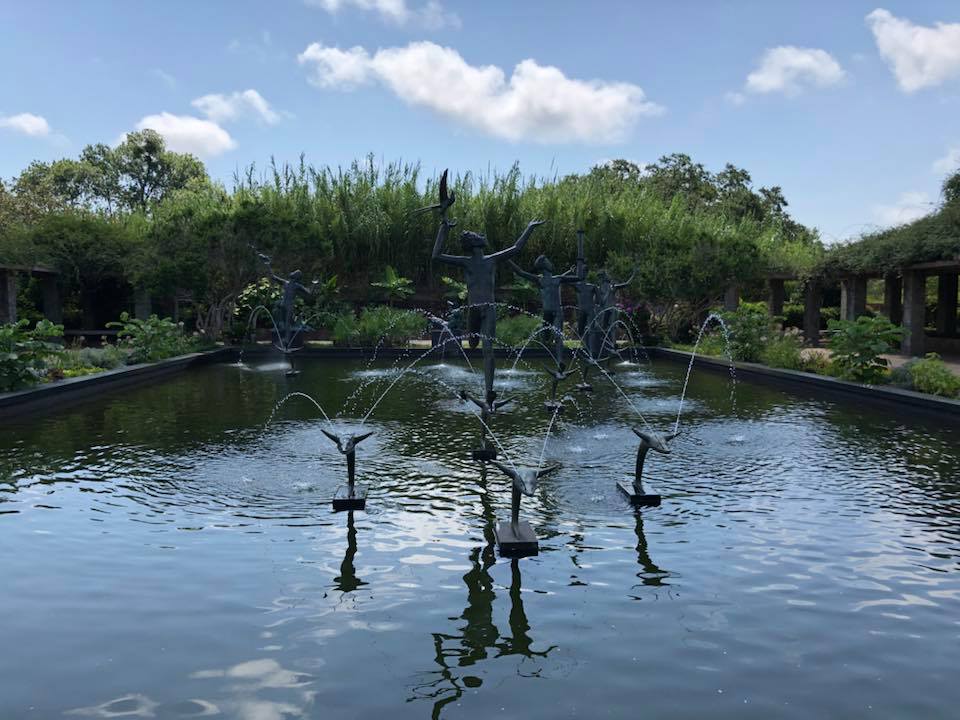 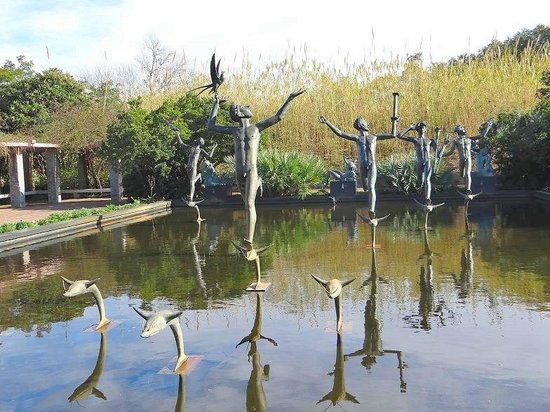 After researching a variety of alternatives they selected Permalac, an outdoor clearcoat lacquer made by Peacock laboratories in Philadelphia. This product offered the best UV blockage of any competitive coating considered.  At the same time, Permalac is exceptionally durable and doesn’t yellow with age.  Restoration experts like Ted Monnich also find Permalac’s high viscosity makes it easy to spray it with a thin mist which provides full coverage in a very thin layer.  Moreover, because Permalac cures in 10 minutes, applying second and third coats can take place shortly after a previous coat has been sprayed.  Plus Permalac is self-leveling so any drips and small puddles can be removed by an additional quick spray of Permalac. Finally, Permalac will not cross-link with the bronze substrate, even after years of service.  This makes a Permalac treatment completely reversible.  When re-treatment is indicated all a user has to do to remove Permalac is give the surface an acetone rubdown.

For professionals charged with the care and maintenance of outdoor public sculpture and monuments, this is a quick and easy restoration process that provides six to ten years of protection before further treatment needs to be considered.  Other professional curators may in time learn to prefer it to the traditional rubbed wax finished currently in wide use. Especially if they don’t want to spend days retreating public monuments and sculpture once a year.

For more information on  Brookgreen gardens contact www.brookgreengardens.com.  To find out more about Permalac or to purchase products contact www.permalac.com or call Peacock Laboratories at 215-729-4400 and ask to talk to Rumya.