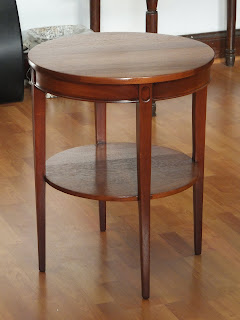 The last few weeks my spare time has been eaten by a move. I’m renting a small townhouse in South Philly, just a few miles from Peacock. The owner of the place has completely renovated the house, but he left the original pine floors. Sanded and refinished they look great. I realized, with some help from my girlfriend, that some of my furniture wasn’t up to standards of this house. Rather than spend the money I don’t have on new stuff, I decided to give my old stuff a sprucing up.
First up, perhaps because it needed the most help, was this old mahogany end table that had belonged to my Grandmother. It had spent a few years in the basement before banging around with me for a while, and the hard living had caught up with it. The old varnish was dull and dark, there were numerous deep scuffs and scars on the table as well as some mysterious discolorations. Some people would call that a antique patina, I call it ugly. I wanted to remove the old finish, sand out the dings, stain it a lighter shade, and then spray it with Permalac it to protect the wood and give it a nice sheen.
The first step was getting rid of the old finish. I used some 150 grit and a palm sander to knock most of it off. Some areas had to be hand sanded. It took a couple of hours to get down to bare wood, mostly because the sand paper kept gunking up with old varnish. I probably could have done it faster with rougher paper, but I was worried I might eat up to much my table in the process. Once I had the original finish off I hand sanded the table with 220 grit to get it ready for the new finish.
The sanded table ended up fairly pale, so I decided to stain it. I wanted to see the grain of the mahogany, but the stain needed to be dark enough to blend out anything I couldn’t fix with sanding. I went with a popular oil based stain in a tint called “English Chestnut.” I spent some time with the stain, making sure that I had even coverage without any blotches. I hate doing things twice. The stain I used asked for an eight hour cure so I called it a day.
The next morning I started spraying the table with Permalac. We have an enclosed tent here at Peacock, it’s not a proper downdraft booth, but it does vent off the over-spray and it keeps the air clear in the rest of the warehouse. I use an HPLV with an .8 mil tip for spraying Permalac. The warehouse air is set at 60 psi, so I use a regulator to dial that down to 30 psi. I also limit the trigger pull so that I get a very fine mist. One thing you want to avoid is laying the Permalac too fast, that can result in an uneven, gummy layer. Instead, take your time and try to spray thin coats. This will give you an even, hard finish.
When spraying Permalac, it’s also important to thin it properly. Thinning Permalac retards its dry time and prevents “hairs” of resin from forming on your project. It was around 55 degrees Fahrenheit when I sprayed this table, so I used #281 thinner to thin the Permalac. 1 part thinner to 4 parts Permalac is a good starting point, On hot, dry days you’ll want to use the #69 thinner instead of the 281, you may also want to increase the percentage of thinner.
For this table I figured 125 ml per coat, so 100 ml Permalac plus 25 ml #281. I shot four coats this way, allowing 10 minutes between coats. The first two coats pretty much vanished into the wood. By the third coat I started to notice a surface build developing. After the fourth coat the table started to developed a nice gloss. I let it sit for 30 minutes and then lightly sanded with 400 grit to polish out any pebbling that hadn’t flowed out on its own. Then I wiped the table clean of dust and shot one more coat. I let this final coat cure for an hour and then lightly sanded with 1000 grit. This final sanding deglosses the finish slightly. I have to say I’m pretty happy with the way it came out. Next up, my ladder back chair.
I am ready to buy now
More Projects – Permalac on Wood

Back to Case Studies