From Our Community: Auto Restoration –  A Permalac Case Study

An old car enthusiast from Dallas, TX has become very enthusiastic about the benefits of Permalac, the outdoor clear coat lacquer manufactured by Peacock Laboratories in Philadelphia, PA.

“Permalac does a great job of sealing any number of components under the hood. It is especially effective in filling in and smoothing over the micro-pores that are always found on the surface of aluminum and other metals. After coating a newly finished alternator with Permalac, for example, the clean polished look will last for months, even years. Without Permalac, the surface soon develops a light bloom corrosion. That’s because there’s no way to arrest the chemical reaction that always takes place in the imperfections of unprotected metal surfaces.”

Permalac is used by sculptors, sign makers, siding manufacturers and other outdoor installers because it protects metal and other substrates from environmental degradation, physical abuse such as windborne sand, UV and salt attack. Plus it doesn’t change the original appearance of a substrate in any way; many users report that installations look “as good as new” up to ten years after being coated with Permalac.

The enthusiast reports that Permalac goes on smoothly and maintains a uniform thickness even on objects with considerable shape profile. “One of the best things about Permalac is the way a second coat blends in perfectly with the first coat. We like to coat all bolts with Permalac after polishing them to a bright finish. So scratches can’t be avoided when they’re screwed in place. But after a quick touch up with Permalac, no one can see any difference.”

He also comments favorably on Permalac ductility which enables it to stay bonded in high vibration areas. “The Permalac surface is also very hard so the finish doesn’t scratch easily and isn’t compromised by heat.”

He is currently restoring a 1970 Plymouth Roadrunner and a 1968 Mercedes Benz. Over the years he has tried a number of different protective coatings but none have proved satisfactory — until Permalac. “Competitive coatings just don’t hold up, and I’ve tried a number. Even coating with yellow chromate on zinc plating looks dull after a year.” Finally, he noted that he can achieve an even harder Permalac surface if he heats a coated part in an over to a temperature from 150°F to 170°F. 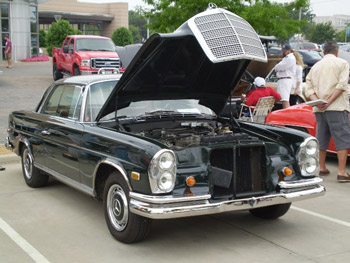